This arose because natural gas demand increased faster than its supply increased. As a result, natural gas is generating 26 percent of the nation’s electricity for the first 6 months of this year, compared to 30 percent last year when natural gas prices were the lowest in a decade. Natural gas’s current share of the generation market is still higher than its more recent historical share of 20 percent. Coal is now generating 39 percent of the nation’s electricity, up from 35 percent for the first half of 2012. 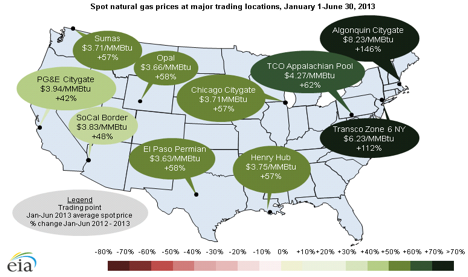 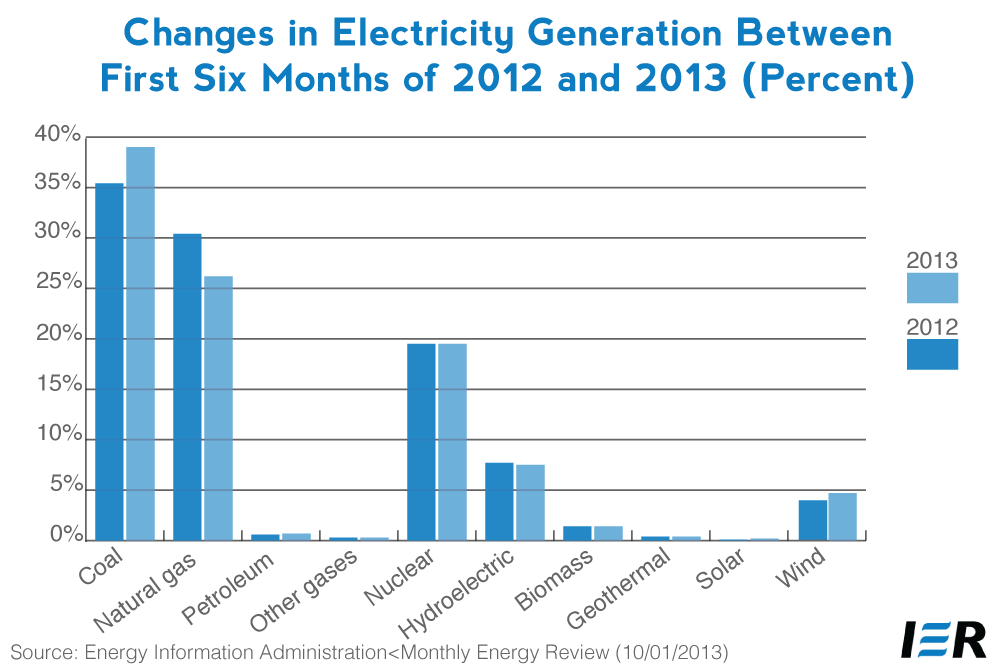 The Future of Coal-Fired Generation

In the past, the choice between natural gas versus coal generation has been one of economics (except for the limitations on natural gas after the oil embargo in the 1970s). The Obama Administration’s ‘war on coal,’ however, is game playing that will have no noticeable benefit to carbon emissions reductions globally. While the United States has been reducing its coal consumption, the world has been increasing its consumption of coal. From Germany, which needs to back-up its renewable plants with coal-fired plants because natural gas prices are so daunting in Germany, to developing countries in Asia and elsewhere, coal production is increasing. According to Energy Information Administration (EIA) statistics, while the United States decreased its coal consumption by 15 percent between 2010 and 2012, Germany increased its coal consumption by 3 percent, China by 14 percent, and India by 21 percent. China, itself, consumes about 50 percent of the world’s coal consumption, and 4 times more than the United States consumes. 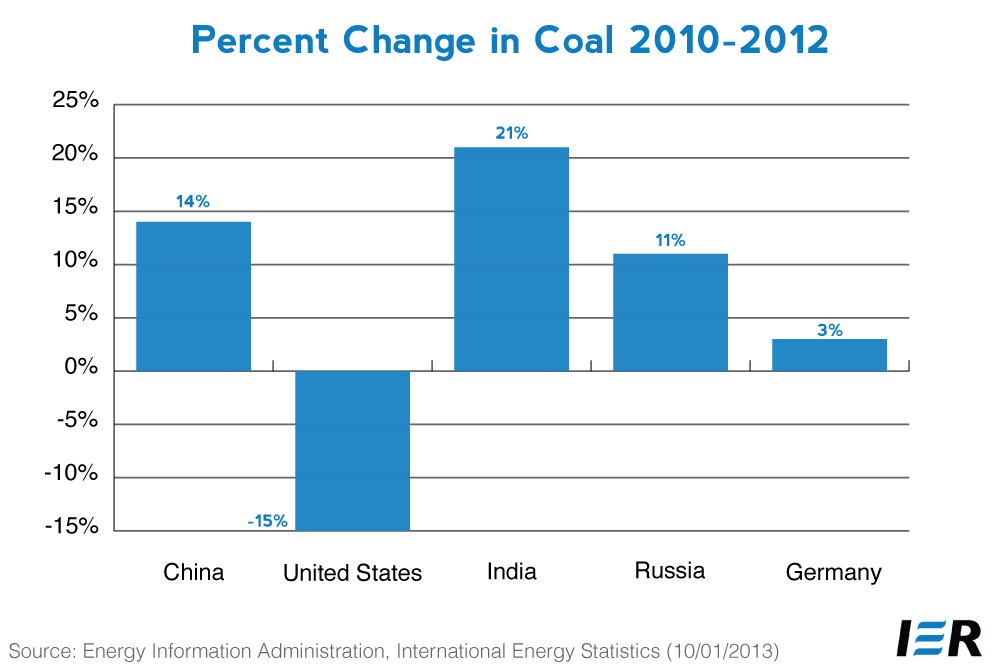 It should be noted that China, India, Russia, and Germany were all signatories to the Kyoto Protocol.

Nonetheless, the Obama Administration presses on with a platform of policies whose ultimate end is the destruction of our coal industry. Regulations by the Environmental Protection Agency (EPA) regarding the MATS rule have resulted in the announced shutdown of about 300 coal-fired units nationwide.[i] Coal mines have been closing, particularly in West Virginia, whose economy is heavily dependent on coal.

But that was just one of the first steps regarding the Administration’s ‘war on coal’. Most recently, EPA ruled that new coal-fired plants must have carbon capture and sequestration (CCS) technology in order to meet new requirements that allow coal-fired plants to emit only 1,100 pounds of carbon dioxide per megawatt hour of electricity, around 40 percent less than the average U.S. coal-fired plant emits.  Unfortunately for the American public, those who work in the coal industry and consumers of electricity, this technology is not commercially available, despite EPA’s citing examples that say the opposite. (Click here for more detail.)  As Robert Bryce has written:

“There are numerous problems with CCS. Among them: It’s extremely expensive; it dramatically reduces the output of power plants; no pipelines exist to transport the carbon dioxide to a location where it could be sequestered; the opposition to those pipelines and sequestration projects will be significant; and, finally, the need for CCS has been obviated by the fact that the U.S. is already leading the world in reducing its carbon dioxide emissions.”[ii]

According to EIA, if the technology were commercially available, a new coal-fired power plant would cost more than twice what a new natural gas-fired plant would cost. Further, environmental equipment added to the plant would reduce its output potential by 28 percent according to industry experts. According to the Pacific Northwest Laboratory, a new pipeline system with 23,000 miles of pipe would be required to move the captured carbon to its sequester location.[iii] At $4 million per mile, the pipeline system would cost the nation $92 billion assuming the pipeline could be permitted, which is a huge assumption today.  Moreover, there is no plan in place for the sequestration of the carbon dioxide, and in the absence of clear guidance about whether the appropriate governments will allow its injection into the earth, no one can be expected to build a multibillion dollar plant that sequesters carbon dioxide, in much the same way that nuclear energy suffers from the lack of a working long term storage site for its waste.

According to EIA estimates, carbon dioxide emissions in the United States have already been reduced by 12 percent between 2005 and 2012. President Obama’s goal is a 17 percent reduction by 2017. While a good portion of this reduction stems from the most sluggish economic recovery since the Great Depression, we are well on our way toward meeting that goal.

But, the President Obama’s EPA is not content to stop here. The next step, which is coming in June 2014,  is to make carbon dioxide reduction a requirement for existing coal-fired power plants, most of which are not even configured to add the necessary environmental equipment even if it were commercially available.

Gina McCarthy, EPA’s Administrator told the House Energy and Commerce Committee when she testified earlier this month that the benefit of this regulation is our leadership, but there will be no meaningful change in the climate change indicators her agency posted on its website. What all this means for U.S. residents is higher electricity prices so that we can serve as an example for the international community, in the hopes that if we force expensive energy on Americans, other nations will follow.

The good news for the people in the U.S. coal industry and in coal states is that the economics between coal and natural gas are allowing coal’s share of the generation market to increase a bit, hopefully saving a few more U.S. miners’ jobs. The bad news is that the Obama Administration’s EPA is pursuing the President’s ‘war on coal’ through increased regulation that will surely destroy this U.S. industry and increase consumer prices with no apparent gain to world carbon dioxide emission reductions.  This is consistent with the President’s promise 5 years ago.

U.S. Oil and Natural Gas to Reach Levels Not Seen in Decades . . . Again

What if your life were as unreliable as wind power?