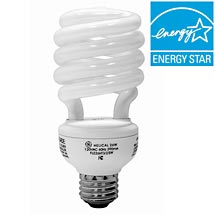 business and in turn destroys the old way of doing business.  For instance, those who made light bulbs creatively destroyed the candle maker. The consumer, who demands better service at lower prices, drives this process of creative destruction.  However, this lesson has been lost on California lawmakers when it comes to energy policy – and everything else for that matter – but especially when considering the compact fluorescent light (CFL).

The Wall Street Journal points out that California public utilities are paying out $548 million over the next seven years in order to subsidize the purchase of CFL’s. The hope is that this program will creatively destroy of the incandescent light bulb and save energy.  The nightmare is that this program has only done the former.

This program unnaturally lowered the price of one CFL from $4 to $1.30. The prevailing logic in Sacramento was that the $548 million used to subsidize the purchase of CFL’s would be recouped on the back end with energy savings, but that hasn’t been the case.

Here is what the WSJ has to say:

One hitch was the compact-fluorescent burnout rate. When PG&E began its 2006-2008 program, it figured the useful life of each bulb would be 9.4 years. Now, with experience, it has cut the estimate to 6.3 years, which limits the energy savings. Field tests show higher burnout rates in certain locations, such as bathrooms and in recessed lighting. Turning them on and off a lot also appears to impair longevity.

In the end, there might be a sliver lining to California’s chronic budget debacles: the state might default and the lights will be turned off; saving energy, money and the consumer from unintended consequences of central plans.

I hope Sacramento’s next bright idea stays just that, an idea and not public policy.

A few notes on Energy Policy of the past and present Congressional Sessions.