Environmentalists critical of electrified America must have mixed emotions this time of the year. It may be the season of good cheer and goodwill toward all, but it is also the time of the most conspicuous of energy consumption. America the Beautiful is at her best when billions of tiny stringed lights turn the mundane of darkness into magnificent glory. Holiday lighting is a great social offering—a positive externality in the jargon of economics—given by many to all.

While energy doomsayers such as Paul Ehrlich have railed against “garish commercial Christmas displays,” today’s headline grabbers (Grist, Climate Progress, where are you?) have not engaged a public debate over the issue.

Yet holiday lighting is a glaring exception to their goal of reducing discretionary energy usage to help save the world. If holiday energy guzzling is forgiven, why not excuse outdoor heating and cooling, one-switch centralized lighting, and instant-on appliances, not to mention hot tubs and SUVs?

Prancing around to turn on individual lights or waiting for the paper copier to warm up wastes the scarcest and one truly depleting resource: a person’s time. Surely extra energy use for comfort and convenience has priority over purely celebratory uses of energy.

Resourceship: More Energy for All

What about the holiday humbug that celebratory electricity depletes energy minerals, fouls the air, and “destabilizes” the climate? Good tidings abound!

Between 1980 and 2014, despite record production, world reserves of oil and natural gas have both grown by more than 150 percent. The U.S. has been at the forefront of this increase, with domestic increases of as much as 10 percent in one year. World coal reserves compute to 113 years supply of current usage, the highest of these three energy resources.

Political events can drive down supply down and increase prices, but the raw mineral resource base is prolific—and expanding in economic terms thanks to an inexhaustible, cascading human ingenuity and increasing exploratory capital. This points to worldwide energy privatization, beginning with subsoil rights to minerals, as the way forward for citizens and economies.

Growing energy consumption has been accompanied by improving air quality.

The U.S. Environmental Protection Agency reported that air emissions of the criteria pollutants declined by 68 percent between 1970 and 2013, while energy usage increased by 44 percent. Further air emission reductions are expected under existing regulations. 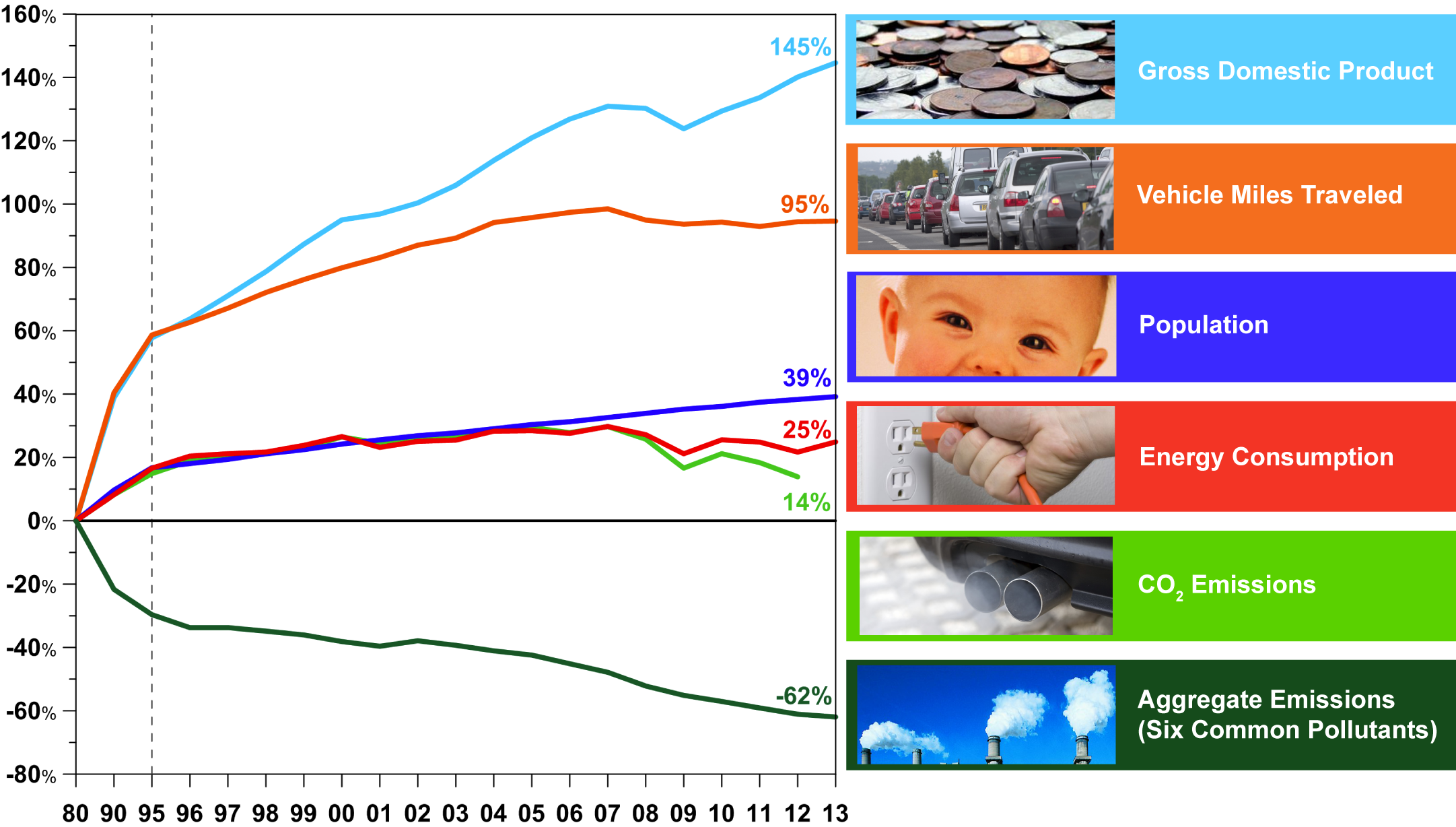 High-warming scenarios from climate models are increasingly being refuted by reality. Instead of steadily rising global temperatures, there has been a “pause” of global warming since the late 1990s. The discrepancy between models and data is likely to widen, even if average temperatures set a new high (as some are forecasting for 2014).

Climate economists can point to positive externalities, not only negative ones, from the human influence on global climate. A moderately warmer, wetter world, whether natural or anthropogenic, such as experienced since the end of the Little Ice Age in the mid-19th century, has brought significant benefits.

Importantly, the wealth created from affordable, plentiful energy provides the primary means for societies to improve the environment–and protect against weather and climate events. In the final analysis, wealth is environmental health, which explains why increasing energy usage and environmental improvement have gone hand-in-hand in the Western world.

There is much to be thankful for this holiday season with our energy economy. But thoughts about the less fortunate should be with us too. An estimated 1.3 billion people do not have electricity for lighting, heating, cooling, cooking, or water purification. A Christmas tree for us is likely to be firewood for those living in energy poverty.

For the energy impoverished, there could be no greater holiday gift than affordable electricity itself, explaining why the developing world has flatly rejected proposals from environmental elites to forsake future energy usage in the name of global warming.

Energy consumption is good—just ask some of the 1.3 billion people who don’t have access to electricity. Energy makes our lives safer, cleaner, more comfortable, and more convenient. It also gives us the power to celebrate. May one and all in good conscience enliven this holiday season with lights aplenty. With fuels and energy technologies rapidly improving, Americans can look forward to even more energetic celebrations and shared goodwill in the holidays ahead.