Despite repeated pronouncements and predictions of doom and gloom by environmentalists, there are a lot of reasons to be extremely optimistic on this Earth Day. Economic prosperity, which is the product of both economic and political freedom, has produced a world where resources are more abundant than ever. And over the past several decades, people in the U.S. and around the world have longer life expectancies, better infant survivals rates, and higher incomes per person. From 1961 to 2013, the world’s food supply rose from about 2,300 calories per person per day to over 2,800 calories, an increase of 22 percent.

It’s clear that over the past 50-60 years, we’ve made tremendous gains in human progress, but what about the environment? Contrary to the conventional wisdom of political environmentalists, these positive trends also largely extend to the environment. For example, deforestation is slowing. The loss of forest areas in the 2010s was 40 percent less severe than in the 1990s. As Joakim Book recently explained:

Not only are we having a smaller impact on the environment, but, because of technological progress, our environment is having less of an impact on us as natural disasters are claiming fewer lives than ever before. But what explains all of this?

All of this points to the fact that as economies grow, environmental degradation declines as people grow more prosperous. This pattern, known as the Environmental Kuznets Curve (EKC), is an application of economist Simon Kuznets’ observations on income inequality to environmental quality. Originally, the EKC purported to show that as economies grow from a pre-industrial state into what we know as a developed state, economic inequality initially surges, but eventually levels off and finally falls.

The resulting curve takes the form of an upside-down “U.” The extension of the Kuznets Curve to environmental quality is that as economies grow from a pre-industrial state into what we know as a developed state, environmental degradation initially surges, but eventually levels off and finally falls.

The extent that this is an observable pattern, much can be said about its causes. One clear aspect is industrial efficiency gains driven by profit and loss. Using less to achieve more is part and parcel with profitability, so it would make sense that as firms and industries mature, they become better at maximizing their production and minimizing waste.

Another causal factor is human-environmental tolerance and its status in a values hierarchy. In keeping with Kuznets’ inequality curve, it is argued that people are very tolerant of environmental degradation early in the economic development process, but that when income allows for baseline human needs—food, clothing, shelter—to be met, concerns for environmental quality are expressed. This turning point begins the environmental restoration process. At some point consumers become rich enough that they can afford cleaner air, more nature preserves, and a better overall environment.

An additional concept that is related to the EKC is the Environmental Transition Hypothesis (ETH). The ETH observes the same increase, flattening, and then decrease in environmental degradation, but what distinguishes the ETH is that it is not income per se that initiates the environmental transition, but rather the availability of technology.

Technology can proliferate and positively influence environmental outcomes in countries that may lag behind in economic development allowing them to bypass stages of environmental harm that befell early industrializers. Thanks to innovation, today human beings live healthier, wealthier lives without the effects on the land, water, and air quality that earlier generations experienced.

One of the best pieces of evidence supporting the Environmental Kuznets Curve and the Environmental Transition Hypothesis can be seen in air pollution in the United States. As the chart below shows, between 1970 and 2018, U.S. gross domestic product increased 275 percent, vehicle miles traveled increased 191 percent, energy consumption increased 49 percent, and U.S. population increased by 60 percent. During the same time period, total emissions of the six principal air pollutants dropped by 74 percent. 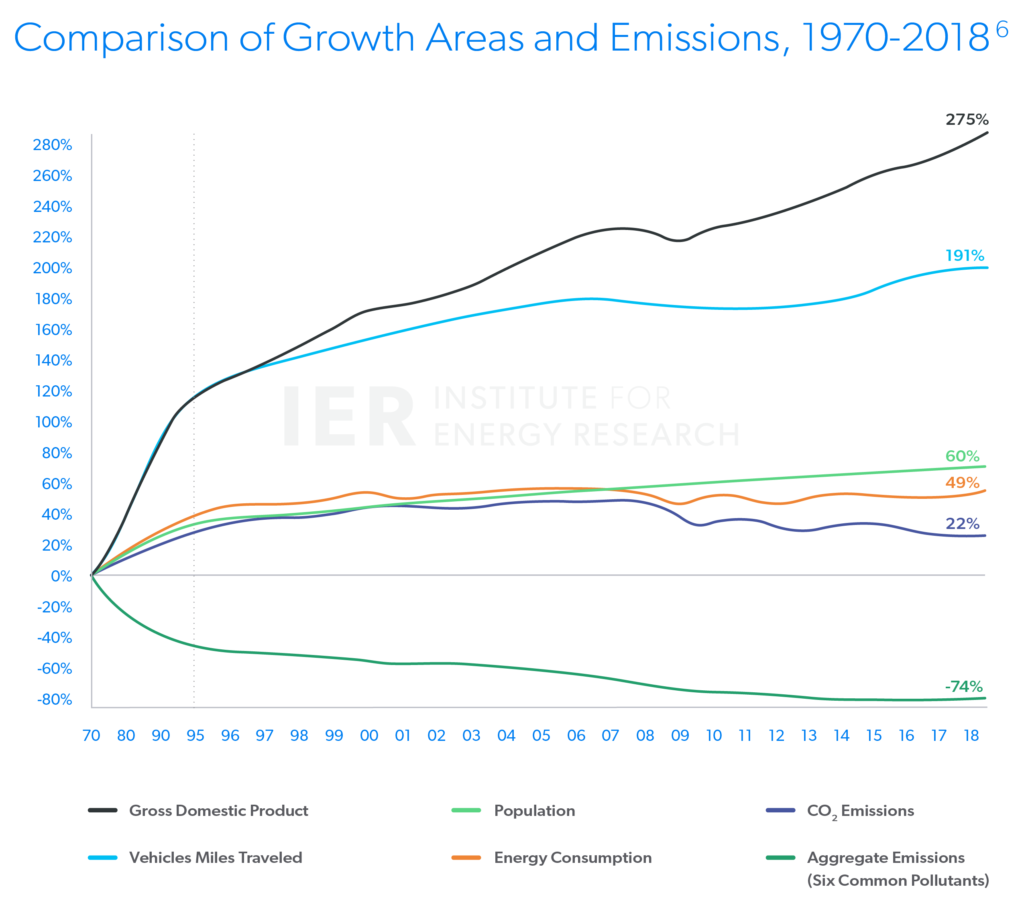 Some people might be quick to point out that 1970 was the year that the EPA was formed, so of course our air is much cleaner today than it was before then. However, even before the EPA existed, air quality had been steadily improving for decades—a steady trend that was due to general economic development, nuisance suits, and regulation at lower levels of government.

Most importantly, we should come to appreciate the prosperity that we currently enjoy, and commit ourselves to promoting the ideas and institutions that have made it possible.

The Plugged In Podcast #74: Joakim Book on Human Progress and Sensible Environmentalism