As I have been detailing for years here on the pages of IER, the actual peer-reviewed research on climate change doesn’t come anywhere close to supporting the apocalyptic proclamations so often coming out of the corporate media and activist camps. Because I’m an economist, I tend to focus on the economics literature, but the pattern also holds for the physical sciences.

I’ll illustrate with the case of the Greenland ice sheet (GIS), which—we are told—will inevitably melt if market forces are left unchecked, leading to utter ruin for our descendants. The collapse of the GIS is one of a handful of frequently cited “tipping points” that ostensibly shows just how irresponsible it would be to delay aggressive government intervention to severely restrict greenhouse gas emissions.

Specifically, the reaction to a new paper by (Nobel laureate) William Nordhaus studying carbon tax policy and the GIS shows how unmoored many in the scientific community are from their own research. In this first post on the topic (Part 1 of 2), I’ll summarize the paper and its critics, showing that their dire warnings of disaster don’t hold up. Then I’ll explain that even the “moderate” Nordhaus is himself far too eager to reserve an important role for government intervention. Then in my next post (Part 2), using Nordhaus’ own framework, I’ll show that a policy of laissez-faire leaves humanity in an excellent position to deal with temperature change and Greenland’s ice sheet.

Nordhaus’ article, “Economics of the disintegration of the Greenland ice sheet,” was published in June in the prestigious journal PNAS, which stands for Proceedings of the National Academy of Sciences. (The PNAS article is available here, though as of this writing it has an important line missing from Figure 5. An earlier, longer version of Nordhaus’ article is available here, where the diagrams are correct. When I quote or give page citations in this post, I will be referring to the shorter PNAS version of the article, unless otherwise stated.)

In the article, Nordhaus integrates the current scientific understanding of the disintegration of the GIS into his industry-standard model of climate change policy (called DICE). He argues that this type of extension is important, because one of the major criticisms of the standard economic models of climate change (including his earlier versions of DICE) is that they do not include “tipping points,” such that their recommendation of a relatively modest initial carbon tax, ramping up gently over time, would lull the public into complacency.

The whole episode is quite ironic. In this new paper, Nordhaus for his part concludes that explicitly including the dynamics of the melting/rebuilding of the Greenland ice sheet into his DICE model does not significantly affect his estimates of the “social cost of carbon.” Furthermore, if governments enact the “optimal carbon tax” trajectory that his model has been recommending, then the melting of Greenland’s ice sheet will be reversed well before it approaches a tipping point.

However, Nordhaus does warn against complacency, because (in his words) “a baseline or no-policy path will lead to the gradual melting of the GIS over the coming millennium.” What’s worse, even if humans neglect action in the near term but then try geo-engineering to fix the situation down the road, it won’t work, because (Nordhaus claims) “the rate of rebuilding is so slow that the damage cannot be undone within the time perspective of climate policy and human settlements.” (As we will see, this is very misleading if it is construed as a strike against geo-engineering.)

In reaction to Nordhaus’ article, some in the climate community were aghast, thinking that it demonstrated just how useless economics was for something as critical as greenhouse gas regulation. The reader must keep in mind that these are the same type of folks who hate the very idea of balancing costs and benefits for an “optimal” amount of (what they would call) carbon pollution, and certainly would not buy the economist argument that climate damages to future generations should be “discounted” by any percentage at all. So when William Nordhaus comes along and says that even if we explicitly include a collapsing ice sheet in the analysis, then that barely moves the dial on his recommended carbon tax, you can understand why tempers would reach unprecedented levels.

The reason I say this whole episode is ironic is that my take is the exact opposite of the interventionist critics. Their hysterical attempts to point out the alleged absurdity of Nordhaus’ findings actually show why the alarmists are standing on thin ice. (Pun definitely intended.) Moreover, although I applaud the technical detail of Nordhaus’ efforts, I think his “test” of geo-engineering is rather obtuse. As I’ll show in Part 2 (my next post), I can come up with a much more relevant scenario sketching a free-market approach that is entirely consistent with the scientific literature, and yet (in the long run) involves less melting of the GIS than occurs under Nordhaus’ “optimal” trajectory.

After including the temperature/melting dynamics of the Greenland ice sheet into his DICE model, and showing how his (simplified) approach approximates the scientific literature’s handling of the topic, Nordhaus concludes that “strong climate policy in the optimal run can stop the GIS decline well short of complete disintegration or critical tipping points.”

Crucially, Nordhaus finds that his original DICE model was giving good recommendations, in the sense that its estimated “social cost of carbon” figure doesn’t increase much, even when explicitly including the dynamics of the melting Greenland ice sheet:

This study demonstrates that, under a very wide range of assumptions, the risk of GIS disintegration—although a major change in the earth system—would make a small further contribution to the overall SCC [social cost of carbon—RPM] or to the overall cost of climate change. The increment to the SCC is near zero at moderate discount rates and as high as 5% of the total SCC at very low discount rates and high melt rates. At the discount rate used by the US government, the addition of GIS damages to the SCC is essentially zero. The intuition behind this result is that the timescale of damages associated with GIS melting is much longer than those associated with non-GIS damages. For example, impacts on agriculture are determined largely by contemporaneous climate changes, while GIS melting is determined by climate only with a long lag.

As mentioned above, Nordhaus also includes what he calls a geo-engineering “experiment” where he assumes humanity does not enact a carbon tax, but down the road implements emergency measures to quickly reduce the temperature and arrest the GIS melting. (To repeat, I will cover Nordhaus’ geo-engineering discussion in my next post, Part 2.)

Some of the academic community were appalled at Nordhaus’ article, thinking it demonstrated what was so wrongheaded about the entire “economics of climate change” approach. Here is one specific complaint: 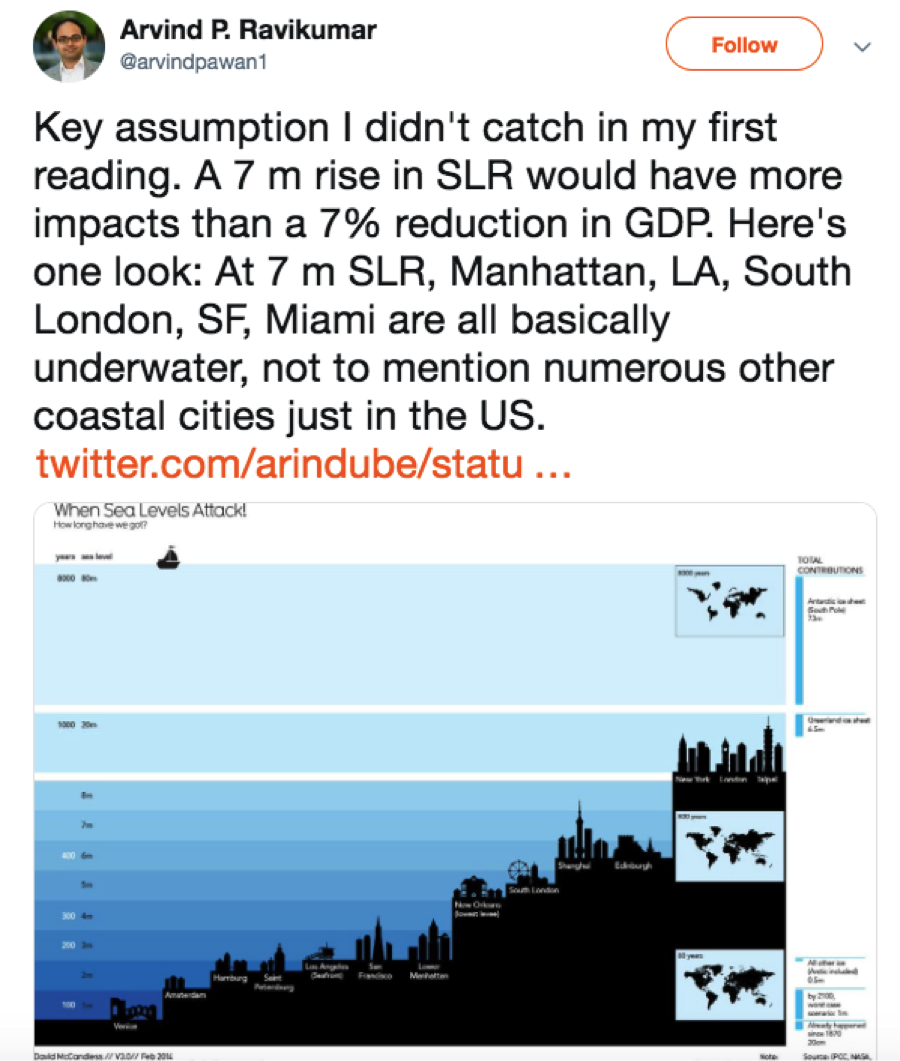 Wow, the critic seems to have a point! In his model, Nordhaus assumes that the damage from a melting ice sheet comes from rising sea levels. And, as the critic points out, Nordhaus’ calibration assumes that at a 7-meter sea lever rise (SLR), global GDP would only be reduced by 7 percent from what it otherwise would have been. Is that really plausible, since many coastal cities would be underwater?

Yet hold on a second. If you look carefully at the sea level diagram (you can click through the twitter links to get a large view), you’ll see that a sea level rise of 7 meters doesn’t occur for at least another 500 or so years.

Is it really so obvious that in the year 2500, humans would be devastated by certain major cities today being underwater? Over the course of centuries, wouldn’t humans move out of the way? There are already plans for developing floating artificial cities (called “seasteading”), and even with our current technology, portions of the Netherlands can survive being almost 7 meters below sea level right now.

Try this: The fictional character Jean-Luc Picard, captain of the Enterprise in the rebooted Star Trek series who was played by Patrick Stewart, was born in the year 2305. So there could have been an episode of the show where Starfleet command contacts Picard and warns that south London is threatened by sea level rise. Would that have been very compelling for the viewers of the show? Or would they have thought, “Humans didn’t see this coming for centuries ahead of time, and do something about it—if only to move inland?!”

I have written this relatively long post in order to demonstrate that those skeptical of government intervention do not need to rely on skepticism of the UN-endorsed physical science. As William Nordhaus’ new paper shows, the standard estimates of the “social cost of carbon” do not rise significantly, even when explicitly modeling the Greenland ice sheet. The extreme activists trying to throw out traditional cost-benefit analysis are shown, once again, to be bluffing.

In my next post, I’ll show moreover that Nordhaus himself is underestimating the potency of a private-sector solution. Even stipulating Nordhaus’ basic framework and assumptions about melting dynamics, I’ll sketch a scenario in which there is no government intervention and yet humanity easily avoids any direct problems from the melting Greenland ice sheet.

Part two of this series is available here.