New York has oil and gas resources, including part of the Marcellus shale formation in the southwestern part of the state, but instead of developing its oil and natural gas resources the state relies principally on oil and gas supplies from other states, Canada, and overseas. Despite years of study, New York State still has a ban on high volume hydraulic fracturing—the technology that created the great increase in oil and natural gas production around the country.

Due to New York’s policies, it has some of the highest energy prices in the nation. In 2012, its electricity price was the 4th highest and in July, 2013, its gasoline price was ranked the 8th highest by AAA.

New York’s total energy consumption is among the highest in the United States. That consumption, however, is partially countered by low energy intensity and per capita energy use, due in part to New York City’s widely used mass transportation systems and high density housing. The commercial and residential sectors lead state energy demand, followed by the transportation sector. 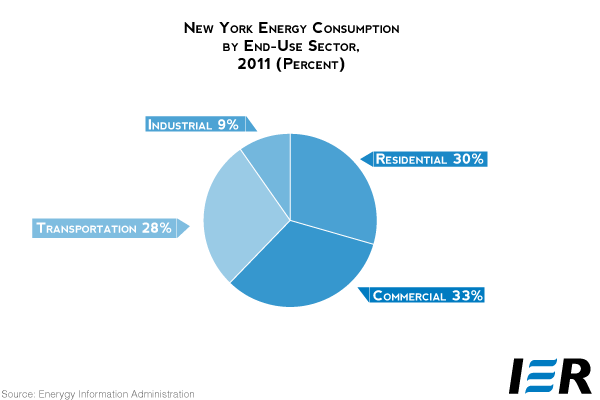 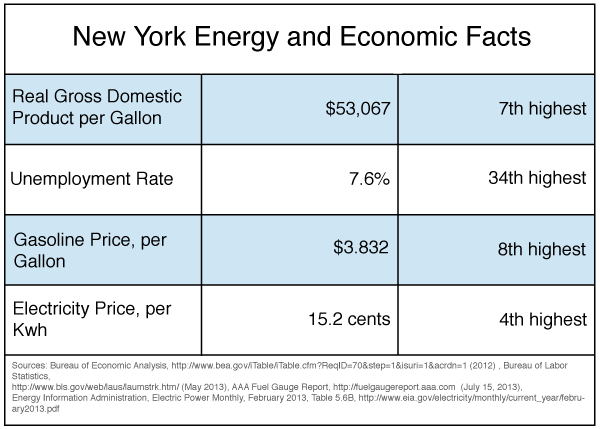 The Marcellus shale formation, which contains unconventional shale gas, underlies southwestern New York, but the state does not allow the use of hydraulic fracturing to access the shale gas. The Marcellus shale is estimated to hold at least 141 trillion cubic feet in technically recoverable natural gas. New York also has some minor reserves of conventional natural gas, found primarily in the far western part of the State near Lake Erie.

While western New York produces some natural gas, the vast majority of New York’s natural gas supply is brought in via pipeline from other states and Canada. The Transcontinental and Tennessee Gas Transmission pipelines from the Gulf Coast and the Iroquois pipeline from Canada link up with local gas distribution networks that supply the New York City metropolitan area and Long Island. Numerous other gas transmission systems branch in from Pennsylvania and Canada to feed other parts of the state.

According to the Energy Information Administration, almost 56 percent of New York homes are heated with natural gas compared to almost 30 percent who use home heating oil.

New York’s petroleum products are supplied by refineries located in New Jersey and Pennsylvania, the Colonial Pipeline system from the Gulf Coast, and foreign imports that principally originate in Canada, the Caribbean, South America, North Africa, and Europe. Located in both New York and New Jersey, the New York Harbor area has a petroleum bulk terminal storage capacity of over 75 million barrels, making it the largest and most important petroleum product hub in the high-demand Northeast.

New York Harbor acts as a central distribution center for the region, and many of the petroleum products delivered to the Harbor are redistributed to smaller ports where they supply local demand. In particular, the Hudson River, which meets the Atlantic Ocean in New York Harbor, provides a major inland water route for petroleum product barges supplying eastern New York and parts of western New England. On the other side of the State, western New York product markets are primarily supplied from Canada at the Port of Buffalo, and via the Buckeye and Sunoco pipeline systems from Pennsylvania and the Midwest. The TEPPCO pipeline system from the Gulf Coast delivers propane to upstate markets.

Reformulated gasoline blended with ethanol is required in New York City and the surrounding metropolitan areas. The New York Harbor area is the primary Northeast distribution hub for ethanol supplies. Ports located on the New Jersey side of New York Harbor receive ethanol rail shipments from the Midwest and marine imports from Brazil and the Caribbean, and then redistribute these supplies to markets throughout the Northeast. Another large ethanol storage facility serving the Northeast is located in Albany, New York.

New York uses fuel oil for home heating during its winters. Almost 30 percent of New York households use fuel oil as their primary energy source for home heating, higher than the national average of 6 percent due to the Northeast’s high use of fuel oil for home heating and to reduce the risk of fuel shortages due to weather and other issues, the Department of Energy established the Northeast Heating Oil Reserve. The Reserve gives Northeast consumers adequate supplies for about 10 days, the time required for ships to carry heating oil from the Gulf of Mexico to the New York Harbor. The Reserve’s storage terminals are located in Perth Amboy, New Jersey, and Groton and New Haven, Connecticut.

New York has considerable renewable energy potential. Several powerful rivers, including the Niagara and the Hudson, provide New York with some of the greatest hydropower resources in the nation. Its hydroelectric generation is the highest of any state east of the Rocky Mountains. When New York’s Robert Moses Niagara plant opened near the Niagara Falls in 1961, it was the largest hydroelectric generation facility in the world. Today, the 2,353-megawatt power plant is New York’s largest electricity generator.  In 2006, the New York Power Authority completed a $300-million upgrade and modernization at the Robert Moses Niagara Power Plant. All 13 turbines were replaced and other improvements were made to generating equipment in the power dam.

New York’s Catskill and Adirondack mountains offer wind power potential. The state is one of the nation’s top generators of electricity from municipal solid waste and landfill gas.  Because parts of New York are densely forested, wood is also a potential fuel source. 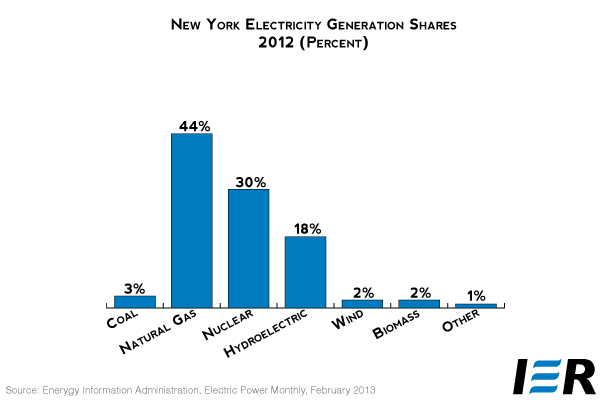 Various power and electric grid failures led to major electricity outages affecting New York in 1965, 1977, and 2003. The August 2003 blackout was the most severe blackout in North American history, affecting an estimated 55 million people in the U.S. Northeast and eastern Canada. Because nuclear power plants are required by Federal law to shut down if back-up power systems fail for safety reasons, all four of New York’s nuclear power plants were forced offline. As a result, almost the entire state lost power during the incident.

Below are some facts about New York’s regulatory environment that are likely to affect the cost of energy or the cost of using energy. Although affordable energy is a vital component of a healthy economy, regulations frequently increase energy costs.  And New York has imposed a number of costly regulations.

New York does not require a cap on total greenhouse gas emissions, but the 2009 State Energy Plan discussed the opportunities and challenges of an 80 percent reduction from 1990 levels by 2050. The State Energy Plan recommended a climate planning process to meet GHG reduction goals, and promotes key interim GHG reduction policies, including policies that increase energy efficiency and reduce the amount of energy consumed, and programs that promote the development and deployment of technologies to generate, store and transmit energy generated from low carbon or near-zero-carbon sources.

Also, New York is a member of the Regional Greenhouse Gas Initiative, which has imposed a cap on greenhouse gas emissions from power plants. The Regional Greenhouse Gas Initiative (RGGI) is a regional agreement among nine Northeast states to limit greenhouse gas emissions. The agreement requires states to cap carbon dioxide emissions from the electric generation sector at 2005 levels in 2009 and to reduce those emissions by 10 percent by 2019 through a cap-and-trade program.

The New York Public Service Commission (PSC) adopted a renewable portfolio standard (RPS) in September 2004 that requires utilities to generate a certain percentage of electricity from qualified renewable energy sources. Implementation rules were issued in April 2005. As originally designed, New York’s RPS had a renewable energy target of 25 percent of state electricity consumption by 2013, but was expanded in January 2010 to 30 percent by 2015. Of this 30 percent, approximately 20.7 percent of the target will be derived from existing renewable energy facilities and one percent of the target is expected to be met through voluntary green power sales in 2015. The remainder will be derived from new, eligible resources centrally procured by the New York State Energy Research and Development Authority. Eligible new renewable resources fall into two tiers: a Main Tier (about 91.56 percent of incremental renewable generation) and a Customer-Sited Tier (about 8.44 percent). Resources eligible for the Main Tier include methane digesters and other forms of biomass, liquid biofuels, fuel cells, hydroelectric power, photovoltaics (PV), ocean power, tidal power, and wind power. The resources eligible for the Customer-Sited Tier are fuel cells, photovoltaics, solar hot water, wind turbines, and methane digesters.

New York does not require the state’s gasoline to be mixed with renewable fuels. However, New York requires that motorists in the New York metropolitan area use reformulated gasoline blended with ethanol.

New York requires new residential and commercial buildings to meet energy efficiency standards. Residential and commercial buildings must meet the New York Energy Conservation Construction Code, which is based on the 2009 International Energy Conservation Code (IECC) and ASHRAE 90.1-2007. The IECC (developed by the International Code Council) and ASHRAE 90.1 (developed by the American Society of Heating and Refrigeration and Air Conditioning Engineers) are model codes that mandate certain energy efficiency standards.

Governor George Pataki signed Executive Order No. 111 in 2001, requiring executive state agencies to reduce energy consumption 35 percent from 1990 levels by 2010 in buildings they own, lease, or operate. State agencies must also purchase Energy Star products based on life cycle cost when acquiring or replacing energy using equipment. Governor Pataki also committed the state to buy 20 percent of its electricity from renewable sources by 2010. Executive Order 111 also requires new state construction and substantial renovation to meet the U.S. Green Building Council’s Leadership in Energy and Environmental Design (LEED) standards to the extent possible. New state buildings must also exceed the state energy code by at least 20 percent. Certain State Entities were required to purchase alternative-fueled vehicles. The State Fiscal Year 2009/2010 requirement was set at 90 percent and increased 10 percent a year until 2010/11, when all newly acquired, non-emergency, light-duty vehicles were to be alternatively fueled.

Governor Andrew Cuomo signed Executive Order No. 88 on December 28, 2012, directing state agencies and authorities to further improve the energy efficiency of state buildings. Executive Order No. 88 establishes a target of reducing average energy use intensity (EUI) in state-owned and managed buildings by 20 percent relative to the fiscal year 2010/2011 baseline by April 1, 2020. It also tasks the New York Power Authority with creating a Central Management and Implementation Team to administer the order, and directs the state Office of General Services and the New York State Energy Research and Development Authority to provide technical assistance to the team and affected state agencies.

New York State has some of the highest energy prices in the nation mainly due to its regulatory environment. The state has oil and gas resources, including the Marcellus shale. Unlike Pennsylvania, New York bans hydraulic fracturing and imports the majority of its oil and gas requirements from other states, Canada, and overseas. It has the largest hydroelectric generation resources in the nation east of the Rockies from the Niagara and Hudson rivers.