On July 6, a train carrying 72 carloads of crude oil derailed in Lac-Megantic, a small Quebec town just 10 miles from the Maine border. The resulting explosion and fires left an estimated 50 people dead.  The tragedy resulting from this runaway train has devastated a community and reignited the debate surrounding the transport of oil in North America.

While both rail and pipeline transport have been incredibly safe historically, a recent string of rail mishaps coupled with a national oil and gas boom and President Obama’s reluctance to make a final decision on the Keystone XL pipeline, have industry leaders reevaluating their options for transportation across the continent.

The Canadian Railroad Association predicts there will be 140,000 carloads of crude oil shipped by freight train this year, up from just 500 carloads in 2009.[1]  In the U.S. that number is even higher. The Association of American Railroads counted over 97,000 carloads of crude in Q1 of 2013, an increase of 166% from Q1 last year.[2] (See Figure 1) This rise in rail usage for oil transport comes as producers aim to meet additional demand with oil production jumping 1.7 million barrels per day since 2008 while pipeline capacity has lagged behind.[3]  (See Figure 2)

Meanwhile, producers continue to wait on President Obama’s decision regarding the Keystone XL pipeline which would bring over 800,000 barrels of crude daily from production sites in Alberta, Canada to refineries along the Gulf of Mexico and add $172 billion in GDP to America’s economy by 2035.[4] The construction of the Keystone XL alone is projected to bring $5.3 billion dollars to the economy.[5] After five years of rebuffing our neighbors to the North, rising uncertainty of future action, and continued strain on transport options, oil producers have adopted greater reliance on railroads to meet their needs.

This increased use of rail  presents new challenges for the country regarding  economic, environmental and safety issues. 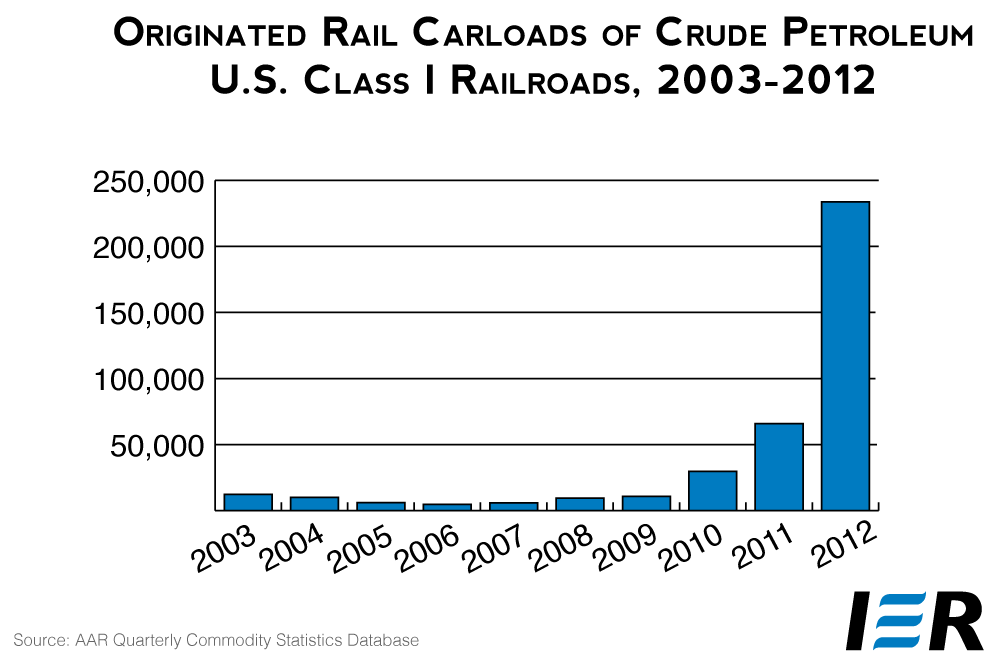 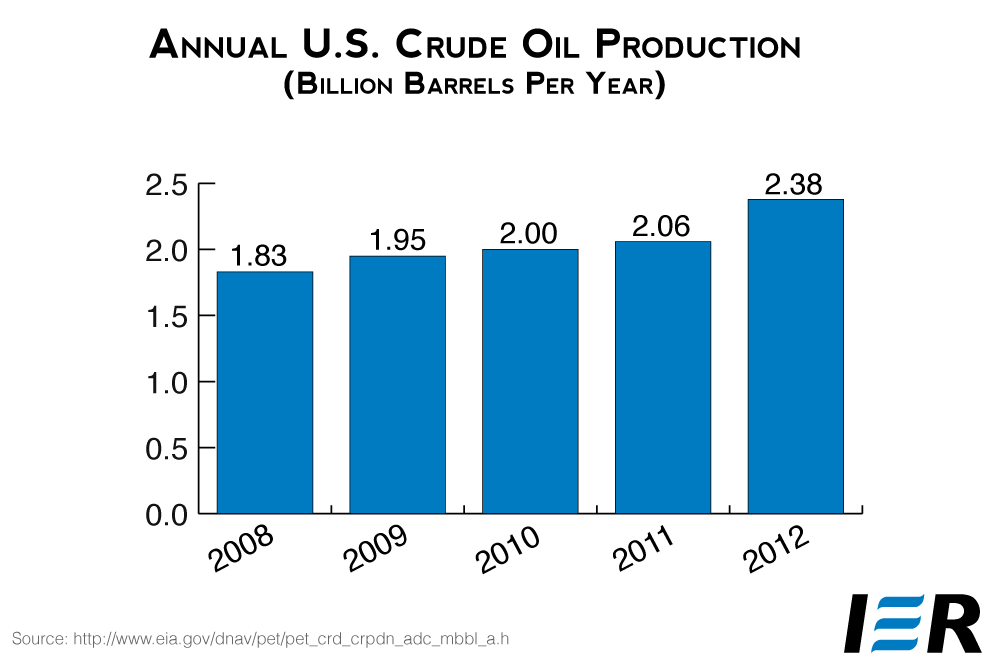 Economically, transporting crude oil by railcar costs about three times as much as pipeline transport, reaching as high as $30 per barrel.[1] Shipping all of the country’s 2.4 Billion barrels produced last year via rail instead of pipeline would result in an additional cost to consumers of $48 Billion dollars.

Additionally, rail emits three times more greenhouse gas than pipeline transport and results in six times as many environmental incidents.[2]  Canadian Prime Minister, Stephen Harper, has acknowledged the role rail has played in the expansion of Canada’s energy sector but noted that rail use is “more environmentally challenging” than pipelines.[3]

It is the safety of rail, however, that has been drawn into question lately with a spike in derailments across the U.S. and Canada in the last year. Statistics show there have been over 5400 derailments and 8000 train collisions since 2009.[4][5] Pipeline advocates point out that lines are primarily routed underground and away from population centers and sensitive areas in an effort to limit negative effects of any possible incidents. On the whole, railroads have an admirable safety and environmental record, but the tragic accident at Lac-Megantic reminds us that surface transportation of all types is intrinsically more challenging than transportation by underground pipeline.

In the President’s climate speech last month he said that, “Allowing the Keystone pipeline to be built requires a finding that doing so would be in our nation’s best interest.” Exactly how the “best interest” will be calculated by the Administration is yet to be seen. Numerous State Department reports have said the environmental impacts would be minimal, yet no authorization has been given by the White House.[6]